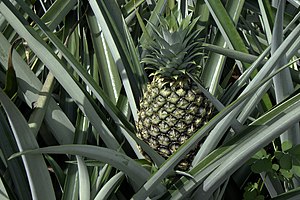 Although the district is the largest pineapple producing district for the Kew variety in the entire state and has been cultivating the fruit for over six decades, marketing remains a big challenge for the farmers.

According to Songpu Gangte, 62, of Bunglon, who has been awarded the best farmer of the year during the festival, he has been cultivating for more than 50 years. It all started from a small area of land and after 1980 he expanded his cultivation to about two hectares of land. Raking in an income of about Rs. 50,000 this year although he expected at least Rs. 60,000, the happy farmer said that with the income over the years he has managed to nurture all eight of his children and today most of them have been able to get government service.

The market has always been the most challenging factor for the farmers. The farmers sell their produce by themselves or to traders who come to buy from them, said Songpu. “But thanks to the efforts of the Festival Committee and its innovative idea of organizing such a festival, hard days of selling the produce in the scorching sun and rain have been left behind to some extent. Traders now come to their doorsteps to purchase their produce,” adds Songpu.

Soizalal Thangzom, Chairman of the Manipur Pineapple Festival Committee, said they came up with the idea to empower the farmers. In the past people were not encouraging and subsequently they were unable to expand their farming. However, since the committee started organising the festival people are today aware of the benefits of the crop and showing more interest. More people are joining the farming trend and today there are about 20,000 farmers engaged in pineapple farming.

Sonilla of Phunchongjang, 27, a mother of two, is among the newcomers who have realized the benefits of pineapple farming. According to her she started cultivating pineapples since 2009 and pineapple is the main source of income for her family.

In the meantime, while speaking during the inaugural function Deputy Commissioner of Churachandpur district, Jacintha Lazarus, IAS said that Manipur is blessed with many natural potentials and stressed the need to preserve and utilize the potential. Pineapple is one such natural product that has the potential to boost the economy of the state as well as the farmers, she said.

The DC urged the farmers to put more labor into the cultivation of the fruit and assured level best support from the government’s side.

Manga Vaiphei, who attended the inaugural function as Chief Guest, said that the government is taking strong initiative to bring the entire pineapple growing district under a common platform by organizing a big festival under the initiative of the state government.