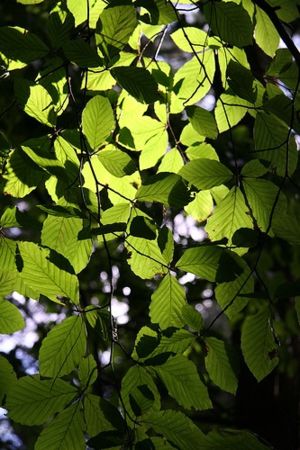 H Birkumar Singh & Monalisa Pukhrambam
The Sugandhmantri (Homalomena aromatica Schott.) locally called
�Hongu-kakla-manbi� belonging to the family Araceae is a rhizomatous
aromatic perennial herb (Figure 1a & 1b) and found mainly in subtropical
humid climates of Central America and Asia. In India it is naturally
localized in northeastern region and distributed in Assam, lower
altitudes of Arunachal Pradesh, Nagaland and Tripura. We have reported
for the first time the extensive growth of sugandhmantri in wild habitat
in the Jiribam Subdivision, south-eastern part of Tamenglong district
and north-western part of Churachandpur district of the Manipur state.
The plant is shade loving with short, stout and tough stem, slow growing
with an average height to 0.40-0.80 m, heart-shaped dark green
cordate-sagittate shaped coraceous leaves with long petiole (Figure 1a
and 1b). Its aromatic rhizomes (Figure 1c) contain an essential oil used
for blending most of the oriental perfumes. On steam distillation the
rhizome yields a yellow coloured essential oil from 2.0 to 2.8% on dry
weight basis and the residue is used in incense making.

The chemical composition of essential oil reported the presence of 64
components of which 39 components accounting for around 88% of the total
oil content where the main components were found to be linalool
(32.43%), terpinen-4-ol (14.08%) and sabinene (8.35%).

The medicinal properties of sugandhmantri are widely described. In
Traditional Chinese medicine, the plant has bitter, pungent and warm
properties which are associated with the liver and kidney meridians
strengthen tendons and bones and used to treat pain and weakness in
lower back and knees along with numbness in the lower extremities. The
Chinese named sugandhmantri as �qian nian jian� which means �thousand
years of health�. Three new sesquiterpene alcohols, 1 beta, 4 beta, 7
alpha- trihydroxyeudesmane, homalomenol A and  homalomenol B were
isolated from the roots of Homalomena aromatica   along with oplopanone,
oplodiol and bullatantriol. The chemical profiles of the essential oil
suggest the pharmacological activities such as anti-inflammatory,
anti-microbial activities, relaxing and calming effects. The essential
oil also possess significant antibacterial activity against some of the
common clinically significant bacterial pathogens like Staphylococcus
aureus, Escherichia coli, Klebsiella pneumoniae, pseudomonas aeruginosa
and Proteus vulgaris with a varying degree of potential inhibitory
effect against the tested pathogens. The local people of Manipur apply
the fresh root paste against various skin diseases. The ethanol extract
of the plant is reported having anti-hepatitis B virus activity. This
essential oil showed a good antifungal activity against Curvularia
pallecens, Aspergillus niger and Fusarium graminearum as well as showing
insecticidal activity against white termite, Odontotermes obesus Rhamb.

Agronomical observations of sugandhmantri were conducted at the
experimental field of the NEIST Substation, Lamphelpat, Imphal during
2006-2009. The essential oil samples were extracted through
hydro-distillation process for estimation of oil content. The
sugandhmantri plant being a sub-tropical species, it loves warm and
humid climate with high annual rainfall ranging from 2000-3000 mm and
sandy-loam to clay-loam soil with organic litter. It prefers acidic
soils of PH 5-6. Fresh rhizome with active buds of 3-4 cm size may be
sprouted within a month time in sandy-loam soil nursery beds with top
litter coverage. The rhizome pieces after sprouting are transplanted in
May to June at furrows 50 cm � 60 cm spacing and covered with soil up to
5 cm. It is more profitable to grow as inter-crop with some plantation
or other tall perennial crops. The harvesting of the plant can be
started from 3rd year of planting onwards. However, it can be harvested
in 2nd year but 3 years rotation period has been found to be more
profitable from both yield and quality. The best time for harvesting of
rhizome is during December to February because during this period
vegetative growth as well as moisture content is minimum and the
essential oil accumulation is at maximum. Rhizomes attaining 15 cm long
are chosen for harvesting. Average fresh yield of rhizome is about
20,000 kg/ha. On drying it yields about 4,000 kg dry rhizomes, @Rs 35-45
per kg of rhizome on dry weight basis which on steam distillation may
yield 96 kg of essential oil (at 2.4% recovery). After harvest, leaves,
stalks with leaf sheath and roots are removed, cleaned and spread on the
floor. When about 50% drying takes places then they are taken out and
sun-dried till a rattling sound on handling is obtained. The fresh and
dry ratio of about 5:1 is safe for storing or distillation. Distillation
should be done within one month to get maximum recovery because with
ageing, oil recovery declines if store for long period. Considering the
cost of oil @ Rs 4500 per kg, the total income generated is Rs 4,32,000
per hectare in the third year of cultivation and similar income is
expected for every 2 alternate years till 7-9 years.

Northeastern India fall within Indo-Burma centre of biodiversity
�hotspot� of global significance and is repository of a large number of
economic plants. The rich economic plant resources of the region are yet
unable to transform into employment opportunity and economy due to lack
of proper planning and marketing channelization. More scientific works
need to be carried out in regards to agrotechnology, post harvest
technology and value addition. Many valuable plants are being exploited
as a minor forest produce since long time back without cultivation and
conservation measures and sugandhmantri is one such plant species.  As
reported, more than 400 MT of dry rhizome of sugandhmantri are collected
from the wild habitat and exported to outside northeastern regions
mainly to Kannauj, Kanpur, Delhi, Kolkata and Mumbai. The local
businessmen are doing brisk business by collecting/purchasing the dried
roots from the villagers at throw away price (Rs 8-10 per kg) against
the actual price of Rs 32-40 per kg in the national market. Instead of
selling the dried rhizome, it is more profitable if distilled for oil.
Establishment of essential oil distillation units at strategic places of
Manipur (suitably in Jiribam of Manipur) and proper marketing
channelization must be established that may enhance the business thereby
earning livelihood of the local people. The sugandhmantri is a low
volume and high cost crop. The local people and state agencies are least
aware about the potentiality of this plant and least attended. This
potent plant can bring an economic change of the farmers. The
conservation of this wild plant is important not only because of the
environmental support they provide, such as watershed protection, soil
conservation/stabilization, and climate regulation but also because of
their role as repositories of biological and genetic diversity. As
sugandhmantri is home to northeastern region and having highly suitable
agro-climate, large scale scientific cultivation of it may surely reduce
the extraction pressure in the wild habitat and providing employment
opportunity thereby boosting the economy of the region. The National
Medicinal Plants Board, New Delhi through the respective State Medicinal
Plants Board of the northeastern India peculiarly Assam, Arunachal
Pradesh, Manipur, Nagaland and Tripura states may be encouraged the
farmers for large scale organized cultivation and distillation of
essential oil of sugandhmantri through various promotional schemes.
Recently, the NEIST, Jorhat has developed two drugs called �Fungi
Destruct� and �Anti Arthritis� where sungandhamantri is used as a
component. The NEIST has approached State Health Deptt., Manipur for
issuing license for manufacturing of these two drugs at the NEIST
Substation, Lamphelpat, Imphal.