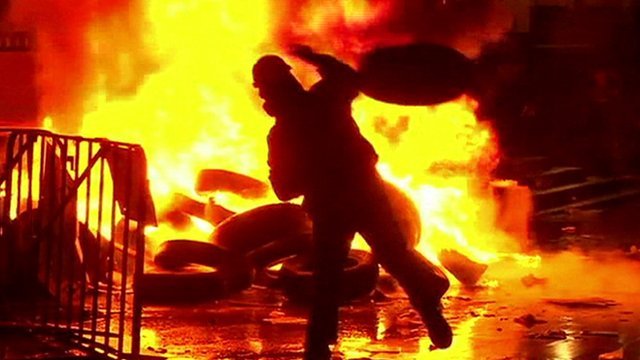 The US has voiced “great concern” about heightened tension in eastern Ukraine after pro-Russia demonstrators seized government buildings in three cities.

US Secretary of State John Kerry told Russian counterpart Sergei Lavrov in a phone call that any Russian efforts at destabilisation “would incur costs”.

They discussed the possibility of direct talks within the next 10 days.

Ukraine is sending security officials to Donetsk, Luhansk and Kharkiv, after buildings there were stormed.

Rebels occupying Donetsk’s regional government building declared a “people’s republic” on Monday and called for a referendum on secession from Ukraine to be held by 11 May.

Russia recently annexed the Ukrainian peninsula of Crimea, where the majority of people are Russian speakers, following a referendum that Kiev and the West say was illegal.

Moscow now has thousands of troops massed along its border with eastern Ukraine. Although it insists it has no intention of invading Ukraine, it says it reserves the right to defend ethnic Russians in the country.

Russia is refusing to recognise the new authorities in Kiev who took power after pro-Moscow President Viktor Yanukovych was ousted in February. 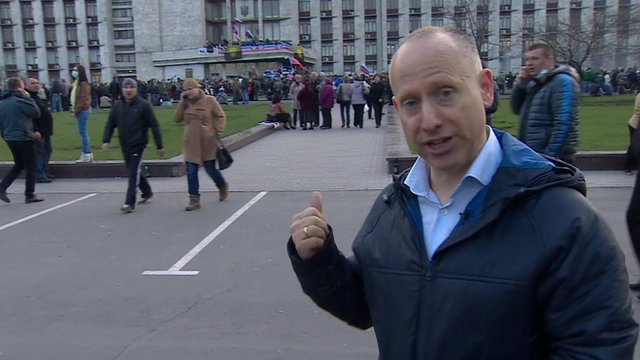 Steve Rosenberg, Donetsk: “People here want this region, and other regions in eastern Ukraine, to break away from Ukraine and join Russia”

US State Department spokeswoman Jen Psaki said that in the telephone call, Mr Kerry “called on Russia to publicly disavow the activities of separatists, saboteurs and provocateurs” in Ukraine.

She said Mr Kerry noted that the actions in eastern Ukraine “do not appear to be a spontaneous set of events”.

“He made clear that any further Russian efforts to destabilise Ukraine will incur further costs for Russia,” Ms Psaki said.

The US and the EU have already imposed targeted sanctions on Russian and Ukrainian individuals over the annexation of Crimea.

Mr Lavrov, in an article on the website of the UK’s Guardian newspaper, denied Russia was destabilising Ukraine and accused the West of the “groundless whipping-up of tension”.

He also warned authorities in Kiev against any use of force against pro-Russian demonstrators. 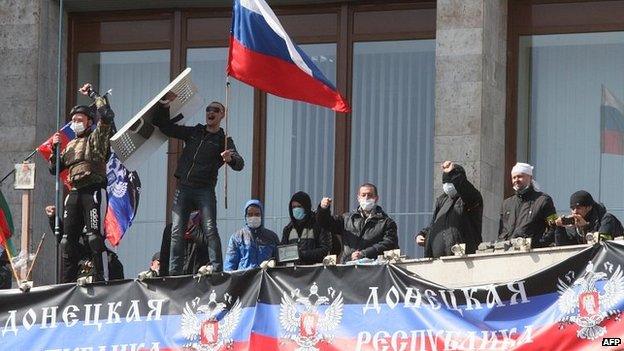 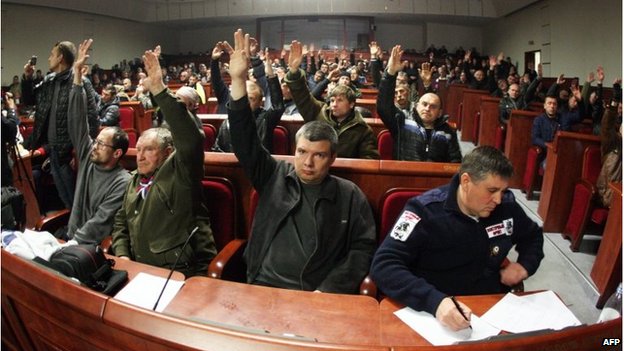 Activists occupying the Donetsk government building “voted” for a referendum 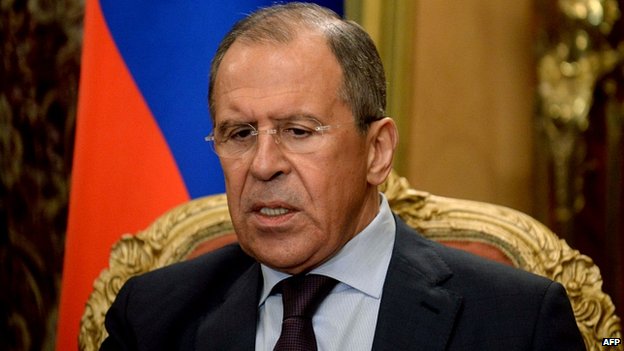 Sergei Lavrov says the West is whipping up tension in Ukraine

It reiterated Moscow’s demands for the creation of a federal Ukraine with broader powers for provinces.

“Stop pointing to Russia, blaming it for all of the troubles of today’s Ukraine,” the statement said.

Pro-Russian protesters seized official buildings in Kharkiv, Luhansk and Donetsk on Sunday night. Police said they cleared protesters from the building in Kharkiv but in Luhansk demonstrators had seized weapons.

Speaking on national TV, he said it was “the second wave” of a Russian operation to destabilise Ukraine, overthrow the government and disrupt planned elections.

He has cancelled a visit to Lithuania to deal with the worsening crisis.

“The plan is to destabilise the situation, the plan is for foreign troops to cross the border and seize the country’s territory, which we will not allow,” he said.

His words were echoed by Ukrainian presidential candidate Yulia Tymoshenko who was in Donetsk on Monday.

She said that the pro-Russian activists were working for the Russian secret service.

BBC Moscow correspondent Daniel Sandford says that although events in Donetsk appear similar to those in Crimea, there are major differences.

Donetsk has many Ukrainian speakers as well as a Russian-speaking majority, and opinion polls there have shown considerable support for a united Ukraine, he says.

Also on Monday, Nato said it was limiting Russian diplomats’ access to its headquarters in Brussels.

It comes days after Nato foreign ministers agreed to suspend all practical co-operation with Moscow over its annexation of Crimea.

Eastern Ukraine was the political heartland of Mr Yanukovych and has a large Russian-speaking population.

Mr Yanukovych fled Kiev for Russia after months of street protests triggered by his refusal to sign an association agreement with the EU in favour of closer ties with Russia. More than 100 people died in the ensuing unrest. 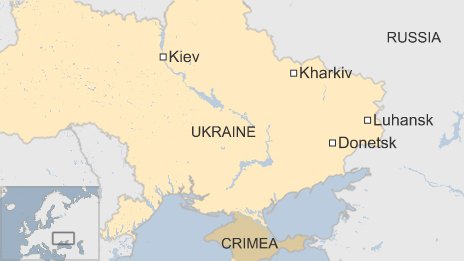